A keen fell-walker and beachcomber was surprised by what his dog Barney found on a beach recently. 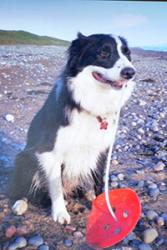 Barney with his find on Silecroft beach, Cumbria.David Russell, a retired salesman from Batley, West Yorkshire was walking on the beach at Silecroft on the West Cumbrian coast, during one of his frequent visits to the region, when Barney found a red plastic disk with a tag.

What Barney and David had found was a drifter released by scientists at Bangor University to learn about the movement of water in the Irish Sea.  But it seems that the researcher didn’t learn much from this particular drifter- as it had been at sea since the mid 1960’s!

David Russell was not too surprised by his find, saying that it was actually his third! He’d previously found another device and a meteorological balloon on the beach.

“There must be something about the currents that bring things to this beach. When I found this drifter it had just come in on the tide, but it’s also a quiet beach without many visitors,” he commented.

A plastic tag attached to the disk asks the finder to return the tag with date and place found before December 1968 to receive a reward of 5/- or 25 p in post-decimalisation currency! 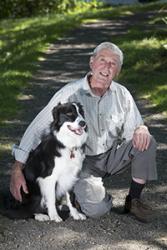 David Russell and Barney back home in Yorkshire.The drifter had been released by John Harvey, a now retired oceanographer, then working at the ‘Marine Sciences Lab’, now the School of Ocean Sciences.

“The research told us about the movement of sea-bed and sea-surface currents in the Irish Sea, and the results were published in a scientific journal in 1968. We typically had return rates of about 34% for our drifters.

He added: “I think the main reaction to it being found and with the plastic components in such good condition after nearly 50 years, is that plastics have a very long life in the sea, which is somewhat disturbing.”

“Research conducted at the School of Ocean Sciences in over half a century, has contributed a great deal to our understanding of currents and tides and how they transport materials of all sizes around the Irish Sea and around our coastline.

The other lesson here is about the fate of plastics in our oceans. This piece has survived its five decades at sea very well, and unfortunately there is far too much plastic in the world’s oceans generally, most of it waste material that really should not have been there.”

From Mr Russell’s description of the plastic drifter, it sounds as though it had become lodged on some underwater obstruction, as one side appeared more worn and scoured by sand or stones than the other. 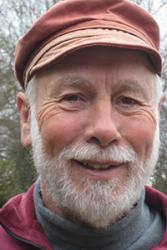 John Harvey, who released the drifters as part of his research.The drifter was probably freed in the recent storms.

John Harvey added: “As far as I can make out, when David Russell found it, the plastic components of the drifter were in quite good condition, but the copper weight which would have been attached originally to stop it floating at the surface and being blown along by the wind was missing - probably corroded away after nearly 50 years.”