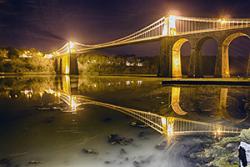 An example of typical light pollution around our coastline.: image courtesy Ben Powell.Marine ecosystems can be changed by night-time artificial lighting according to new research published in the journal Biology Letters. The results indicate that light pollution from coastal communities, shipping and offshore infrastructure could be changing the composition of marine invertebrate communities.

Researchers from Bangor University and the University of Exeter used a raft in the Menai Strait to monitor how artificial light at night affects the settlement of marine invertebrates into new habitats. Light is an important cue which guides the larvae of marine invertebrates as they search for suitable habitats to settle, grow and reproduce.  The practical work was undertaken by Bangor School of Ocean Sciences MSc student Matt Coleman, using a School of Ocean Sciences facility- a floating raft on the Menai Strait.

The researchers found that artificial light both suppressed and encouraged colonisation by several species common to British coasts, including sea squirts and keel worms. These species are often referred to as fouling invertebrates as they adhere to manmade structures sometimes causing problems in marinas, dockyards and aquaculture facilities.

The results indicate that artificial light – increasingly used in coastal environments – could encourage unwanted fouling in marinas and dockyards, but also alter the abundances of these species in the wider environment where they can provide important ecosystem services. 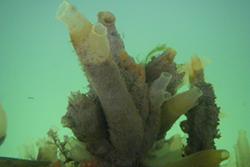 A typical assemblage of organisms which may be affected by light pollution.Coral larvae, for example, use light to identify optimum habitats to settle in and grow into reef building adult structures. As tropical waters tend to be clearer than UK waters it allows artificial light to penetrate deeper and disrupt a wider range of organisms.

Former Bangor PhD student, Dr Tom Davies, now at the University of Exeter’s Environment and Sustainability Institute, who analysed the data, said: “We know that artificial light at night alters the behaviour of many marine animals but this is the first study to show that it can disrupt the development of ecological communities in the marine environment. Further research is urgently needed to assess what level of light can be considered ‘safe’ so that legislation can be put in place to minimise future light pollution from new and existing developments.”

Dr Stuart Jenkins of the School of Ocean Sciences at Bangor University said: “This is an important first step in developing understanding of the way artificial light may be affecting marine coastal assemblages. Our research showed that levels of artificial light, commonly found in urbanised and developed coastal areas, can have important effects on the development of communities inhabiting hard surfaces in shallow water.”

Dr Katherine Griffith, also from the School of Ocean Sciences, added: “With urbanisation on the increase, many coastal areas around the globe will become vulnerable to the effects of artificial light pollution. Therefore, further research on how artificial light may disrupt marine communities is vital if we are to mitigate these impacts.”