Despite high hopes, carbon emissions from Amazonian forest recovery are dwarfed by deforestation

A drone image of secondary forest.: Image credit and copyright Marizilda CruppeRegrowing forests are absorbing just a small proportion of the carbon dioxide released from widespread deforestation in the Amazon, according to new evidence.

Secondary forests – areas of new forest growing on land that has previously been deforested – form a key part of policies aiming to tackle net carbon emissions and mitigate climate change.

In 2017 there were nearly 130,000 square kilometres of secondary forest in the Brazilian Amazon – roughly equivalent to the size of England.

Despite their scale and importance for climate targets, our understanding of their contribution to the tropical carbon balance is incomplete. It was not clear to what extent carbon emissions from deforestation have been offset by secondary forest growth, or how this has varied over time.

A new study by an international team of researchers from the UK and Brazil, published by Global Change Biology, used open source MapBiomas data to map the age, extent and carbon stock of secondary forests across the Brazilian Amazon between 1986 and 2017. 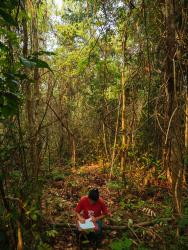 Secondary forest from the ground.: Image credit & copyright Adam Ronan RASAfter calculating how much carbon had been lost through deforestation, the scientists discovered that, in more than 30 years, the regrowth of secondary forests in the Brazilian Amazon has offset less than 10 per cent of emissions from the loss of old-growth forests.

Charlotte Smith, a PhD researcher at Lancaster University and lead author of the study, said: “Secondary forests have an incredible potential to store large quantities of carbon. However, it takes a long time for them to build this carbon stock, so without a drastic decline in the rate of deforestation their environmental benefits will continue to be undermined.”

Charlotte’s research was funded by the Natural Environment Research Council’s Envision Doctoral Training Partnership which is led by Lancaster University in partnership with Bangor University.

Despite a fifth of deforested land now being covered in secondary forest, the researchers found that most secondary forests are relatively young – more than 85 per cent are younger than 20 years old and almost half (42 per cent) are less than five years old.

The researchers then looked at other factors known to affect secondary forest growth and carbon up-take, such as climate, landscape and proximity to old-growth forests, which can act as a source of seeds.

They found that the majority of secondary forests are situated far from primary forests, in the drier parts of the Amazon. These factors suggest they will be relatively poor for taking-up carbon.

The findings highlight that halting deforestation, particularly of old-growth forest, is essential and that secondary forest growth alone is not sufficient to control carbon emissions in the Amazon.

Co-author, Professor Jos Barlow, said: “Although secondary forests could be an important part of the solution to climate change, it is also important not to overstate their relevance. Deforestation rates in the Brazilian Amazon surpassed 10,000km2 last year, and will almost certainly surpass that in 2020”.

“this research clearly demonstrates the high international priority of conservation and sustainable management of the world’s forests in order to protect their carbon stores as well as biodiversity. These issues are the main focus of the acclaimed degrees in forestry and conservation at Bangor University, whose graduates go on to play a crucial role in sustainable forest management both in UK and around the world.

The research is published in the paper ‘Secondary forests offset less than 10% of deforestation-mediated carbon emissions in the Brazilian Amazon’, which has been published by the journal Global Change Biology.