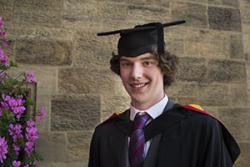 Chris GlassInspired by the sheer beauty of Snowdonia and its surrounding area, a keen conservationist graduates from Bangor University this week.

Feeling extremely proud of what he’s achieved during his time at University, Christopher said that “graduating with a First feels amazing and is the perfect way to top off a fantastic three years.”

Christopher always had a keen interest in nature and the sciences and as a child spent a many a time in the outdoors, especially in the Lake District and Snowdonia. He first developed an academic interest in geography and the environment during secondary school. North Wales has always held a special place in his heart, his love of which has further developed through visiting his brother Stephen, who also graduated from Bangor University in 2012.

Christopher said: “I came to Bangor for several reasons; my love of the outdoors of which Bangor is ideally located with Snowdonia on one side and Anglesey on the other. Another important reason for coming to Bangor to study was the course and the opportunities which have been provided whilst studying. The first impression of the quality of the course was given at an open day, which showed off the high levels of academia along with opportunities given such as fieldtrips which offered practical experience relevant to my course. The final reason for my choosing of Bangor was down to the brilliant experience which my brother had.

“Whilst at Bangor I took part in various projects, work experience and fieldtrips. Through the Horticultural Organic Gardening Society (HOGSoc) I was heavily involved in the planning and development of a project for the Environmental Communications award. Bangor University won the award with the creation of a 60 second Flash Garden, created on the Ffriddoedd accommodation site, in an effort to spread the message of the importance of the environment. I have also been involved in other environmental campaigns such as Blackout Wales.

“In my final year I had the opportunity to go on a fieldtrip to Tenerife. The trip focused on the geology and formation of the island, along with how time and human interactions have caused great variations within the ecology of the island and the soil types which are found across the Canary Islands. The trip was a highly informative experience with tutors providing their expertise on the environment.

“The School provided ample opportunity to gain vital work experience through a professional placement module. For this module I worked at Treborth Botanic Gardens, where I assisted in general maintenance along with plant husbandry. I was also responsible for the continuation of a student led conservation project which focused on the ex-situ conservation of numerous rare and scarce plant species found on the Great Orme at Llandudno. The project involved the creation of an ex-situ conservation garden at Treborth, involving the creation of a rare limestone pavement habitat as well as the care and maintenance of rare plant specimens.

“I was an active member of several societies throughout my three years at Bangor, ranging from science editor for the student newspaper SEREN, to a member of the Geographical Society and the Mountain Walking club. I was heavily involved in the Horticultural Organic Gardening Society and the Students for Treborth Action Group (STAG). I was Garden Manager for HOGSoc, and conservation officer for STAG and am the current Chairperson for STAG. All the involvement with these societies proved to be very rewarding.

“During my second year, I was part of the University’s Peer Guiding Scheme, which was very important for me. The third year of any university course can be particularly busy and stressful. Balancing studying along with helping in the running of multiple societies and becoming a Lead Peer Guide had many responsibilities and was difficult, but also very rewarding.

“All in all, the mixture of academic and extra-curricular experiences has made my time at University brilliant. I shall be coming back to Bangor in September to study a masters in Conservation and Land Management and will also continue as a Peer Guide.”