Migrating bats use the setting sun 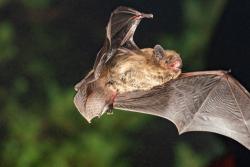 A soprano pipistrelle bat in flight: image (c) Christian GieseBats weighing no more than 6 grams, migrating over a thousand miles from the Baltic to Britain, could be the key to revealing how migrating mammals navigate.

We know more about how birds and reptiles and fish navigate than we do about mammals such as whales or wildebeest, but one part of the puzzle is revealed in the latest edition of Current Biology.

What the latest research has revealed is that, despite being nocturnal creatures, these bats use the direction of the setting sun over the Baltic Sea to re-calibrate their internal magnetic compass. Hiding the setting sun’s rays and showing a mirror image to half the bats, the scientists then released bats from a special release box which tracked their footprints as they left the cage. As the direction of their exit has been found to accurately reflect the direction of flight, the scientists saw that adult bats exposed to the mirror image of the setting sun had re-calibrated their internal magnetic compass to this new information, and had followed that trajectory on their flight. Instead of heading for the Baltic Sea, as the adult bats who saw the setting sun had done, they few east 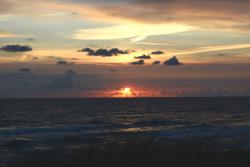 The sun sets over the Baltic Sea enabling pipistrelle bats to calibrate their internal navigation.: Image (c) Oliver Lindecke The sun setting over the Baltic SeaHowever, not all bats use the same system.  Earlier research by the team had shown that homing bats, who do not undertake lengthy migrations rely on their ability to see the polarised refraction of the sun set to recalibrate their internal magnetic compass.

Another factor revealed by the research is that young bats undertaking their first migration did not innately know the direction of flight, meaning that it is a learnt behaviour. This is at odds with birds, who inherit the sense of direction of their migration route.

“We know very little about the mechanisms used by migrating mammals, but it’s easier to work with small bats than it is with larger mammals.   Studying bats as a ‘model’ can provide us with a greater understanding of the different mechanisms used by mammals to navigate over large distances.”

He added: “Bats themselves play such an important role, their consumption of insects is highly valuable to our farming, and though invaluable, calculated to be worth a hypothetical $ 1.75 million to the economy.”

The study involved some 54 bats, half of which acted as control. Those bats whose internal calibration had been confounded, would have had their natural navigation system re-set at the next dusk, to continue their journey.