This article by Michel Kaiser, Honorary Professor, School of Ocean Sciences, is republished from The Conversation under a Creative Commons license. Read the original article.

There has been a lot of debate recently on the extent of the global fishing footprint. A recent paper claimed that fishing affects 55% of the world’s oceans. Given that many people in the developing world rely on fish as their main source of protein, and the increasing preference for luxury fish products in countries such as China, such statistics might seem plausible. 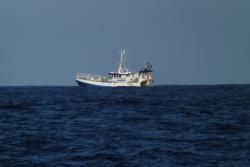 Image credit: Jan HiddinkTo calculate the 55% figure, the researchers relied on the automatic identification system (AIS). Primarily intended for safety purposes, AIS combines radio and satellite monitoring with other electronic data such as speed, heading and destination port, to track, monitor and even predict vessel activity. All vessels over a certain size must have an AIS transceiver, so this widespread monitoring produced the huge amounts of data that allowed the researchers to estimate the global fishing footprint.

However, when determining what proportion of the ocean is being fished, the scale at which the fishing activity is mapped makes a significant difference to the accuracy of the overall result. Using higher resolution data, with grid squares of between one and 3km², rather than 1,000km² for example, produces a footprint which differs by a factor of more than ten.

We need to manage the impact of human activity on ecosystems, but doing so demands a more accurate understanding of fishing. In a similar way to other food production systems, fisheries can have a wide range of effects on the ecosystems and species that they interact with. Wild capture fisheries are also vulnerable to over-fishing unless they are well managed and regulated. For this management to be effective, we need to know how much fishing is taking place, where it is happening, and the exact type of fishing that it is.

Calculating the footprint of bottom trawling

Such a high level of accuracy is especially important when looking at the impact of bottom trawling. Many forms of fishing have a wide impact on the ecosystem. But no fishing activity exemplifies this better than bottom trawling, which sees large, heavy nets being towed across the seabed. It is associated with the removal of species from the seafloor and temporary or longer-lasting modification of habitats. This has become a particularly emotive issue with campaigns seeking to outlaw its use.

However, bottom trawl fishing is a key source of food, accounting for 25% of global landings. With such high demands, we can’t simply stop the practice dead in its tracks. The impacts can be managed, but first we need to understand where bottom trawling occurs and how often, so it can be done in a sustainable way.

For our newly published research, we looked into the true extent of bottom trawling around the world. We used high resolution vessel monitoring data to reconstruct fishing footprints for 24 regions of the sea of less than 9km² each. We found that, on average, only 14% of this area was affected by bottom trawling. There were, however, major regional differences. For example, trawling affects less than 10% of the Australian and New Zealand seabed, compared to over 50% in some European seas.

Funded in part by the Marine Stewardship Council, this research will facilitate the implementation of sustainable fishing practices around the world. It also demonstrates that when fisheries are well-managed and sustainably fished, the associated impacts on the seabed are reduced, compared to other less well managed fisheries. In other words, if you manage the fishing of the target species appropriately you’ll probably also succeed in reducing other effects of fishing activity. 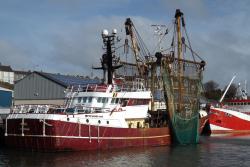 Trawler at the dockside.: Image credit: Jan HiddinkSome habitats are also highly resilient to the effects of trawling, whereas others are more vulnerable and take decades to recover. Recent advances in our understanding of the effects of bottom trawls mean that it is now possible to predict their impact and to suggest pragmatic ways to reduce those impacts through different management options, such as by directing fishing activity away from sensitive areas of the seabed to more resilient areas.

These new advances in understanding pave the way for a truly ecosystem-based approach to fisheries management, in which we can manage target species and the wider effects of fishing on the seabed. This is the approach taken by the Marine Stewardship Council fisheries standard, which integrates the full range of ecosystem effects of fishing.

So, what challenges remain? While AIS data is publicly available, it covers only a proportion of the world’s fishing fleet. Vessel monitoring systems (VMS) are used for a larger selection of the world’s fishing fleets, but can be shrouded in confidentiality issues (the data is usually considered the property of fishermen). In addition, small-scale vessels, which in many places account for the largest proportion of fishing boats, are not monitored at present.

However, much data does still exist that can guide improvements in the management of fishing impact. It is critical that we interpret this data properly, using appropriate resolution mapping, to avoid inaccurate representations of the size and extent of fishing’s footprint on the oceans.