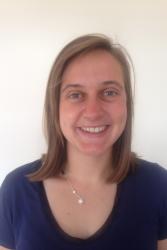 Megan Baker will receive her Award in September.A Bangor University PhD student is the first female to be awarded an international prize for her outstanding work in the field of marine sedimentology.