This article  by Simon Willcock, Senior Lecturer in Environmental Geography, at the School of Natural Sciences and Adham Ashton-Butt, Post-doctoral Research Associate, University of Hull is republished from The Conversation under a Creative Commons license. Read the original article. 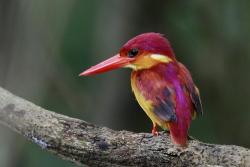 Rufous-backed dwarf kingfisher habitat is lost when forests are cleared for oil palm plantations.: cropped image by Carmelo Lopex Abad CC by NC 4.0The environmental impact of palm oil production has been well publicised. Found in everything from food to cosmetics, the deforestation, ecosystem decline and biodiversity loss associated with its use is a serious cause for concern.

What many people may not know, however, is that oil palm trees – the fruit of which is used to create palm oil – have a limited commercial lifespan of 25 years. Once this period has ended, the plantation is cut down and replanted, as older trees start to become less productive and are difficult to harvest. Our research has now found that this replanting might be causing a second wave of biodiversity loss, further damaging the environment where these plantations have been created.

An often overlooked fact is that oil palm plantations actually have higher levels of biodiversity compared to some other crops. More species of forest butterflies would be lost if a forest were converted to a rubber plantation, than if it were converted to oil palm, for example. One reason for this is that oil palm plantations provide a habitat that is more similar to tropical forest than other forms of agriculture (such as soybean production). The vegetation growing beneath the oil palm canopy (called understory vegetation) also provides food and a habitat for many different species, allowing them to thrive. Lizard abundance typically increases when primary forests are converted to oil palm, for example.

This does not mean oil palm plantations are good for the environment. In South-East Asia, where 85% of palm oil is produced, the conversion of forest to oil palm plantations has caused declines in the number of several charismatic animals, including orangutans, sun bears and hornbills. Globally, palm oil production affects at least 193 threatened species, and further expansion could affect 54% of threatened mammals and 64% of threatened birds. 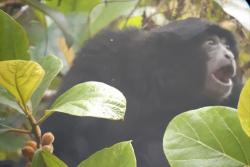 Siamang gibbon habitat has been lost by the planting of oil palm.: C John Howes CC-by-NC 4.0Banning palm oil would likely only displace, not halt this biodiversity loss. Several large brands and retailers are already producing products using sustainably certified palm oil, as consumers reassess the impact of their purchasing. But as it is such an ubiquitous ingredient, if it were outlawed companies would need an alternative to keep producing products which include it, and developing countries would need to find something else to contribute to their economies. Production would shift to the cultivation of other oil crops elsewhere, such as rapeseed, sunflower or soybean, in order to meet global demand. In fact, since oil palm produces the highest yields per hectare – up to nine times more oil than any other vegetable oil crop – it could be argued that cultivating oil palm minimises deforestation.

That’s not to say further deforestation should be encouraged to create plantations though. It is preferable to replace plantations in situ, replanting each site so that land already allocated for palm oil production can be reused. This replanting is no small undertaking – 13m hectares of palm oil plantations are to be uprooted by the year 2030, an area nearly twice the size of Scotland. However, our study reveals that much more needs to be done in the management and processes around this replanting, in order to maximise productivity and protect biodiversity in plantations.

We found significant declines in the biodiversity and abundance of soil organisms as a consequence of palm replanting. While there was some recovery over the seven years it takes the new crop to establish, the samples we took still had nearly 20% less diversity of invertebrates (such as ants, earthworms, millipedes and spiders) than oil palm converted directly from forest.

We also found that second-wave mature oil palm trees had 59% fewer animals than the previous crop. This drastic change could have severe repercussions for soil health and the overall agro-ecosystem sustainability. Without healthy, well-functioning soil, crop production suffers.

It is likely that replanting drives these declines. Prior to replanting, heavy machinery is used to uproot old palms. This severely disrupts the soil, making upper layers vulnerable to erosion and compaction, reducing its capacity to hold water. This is likely to have a negative impact on biodiversity, which is then further reduced due to the heavy use of pesticides.

Without change to these management practices, soil degradation is likely to continue, causing decreases in future biodiversity, as well as the productivity of the plantation.

Ultimately, palm oil appears to be a necessary food product for growing populations. However, now that we have identified some of the detrimental consequences of replanting practices, it is clear that long-term production of palm oil comes at a higher cost than previously thought. The world needs to push for more sustainable palm oil, and those in the industry must explore more biodiversity-friendly replanting practices in order to lessen the long-term impacts of intensive oil palm cultivation.