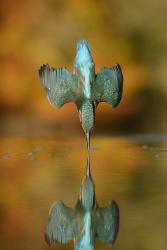 An Eurasian kingfisher breaks the water's surface without a splash : Slight crop Image credit & copyright Alan McFadyen Instagram alanmcfadyen Renowned for their noiseless dive, the kingfisher’s iconic beak-shape has inspired the design of high speed bullet trains. Now scientists have tested beak-shape among some of the birds’ 114 species found world-wide, to assess which shape is the most hydrodynamic.

Renowned for their hydrodynamic splash and noise free dives, Kristen wanted to test the kingfisher beaks in the lab, and has come up with a ‘Top 10’ when it comes to the most efficient design. The lab tests measured how the speed of entry changed as the models hit the water, and found evidence that a longer, narrower shape was more efficient.

This also relates to other diving species such as Gannets, renowned for pulling their wings back and ‘spearing’ the water with their whole body profile.

The ‘top 3 kingfishers’ were the diving species. According to their tests, the top performer was the Green-and-rufous Kingfisher, a species from the Amazon basin (Brazil and Venezuela), in ‘second place’ was the Amazon Kingfisher, which is widespread through parts of Central and South America, and coming in third was the Beach Kingfisher, found only in Papua New Guinea and Indonesia. Britain’s native electric blue kingfisher, also found across Eurasia and North Africa, comes in at 6th.

Some kingfishers forage rather than dive for food, so their beaks have not evolved to break the water so seamlessly.

Asked why this research was valuable, Kristen explained that although designers use the natural world as inspiration and that the kingfisher beak shape had been used to redesign bullet trains to remove a sonic boom as they compressed air when entering tunnels, the design solution had come through observation, but no one had actually validated the kingfisher beak shape under lab conditions.

Achieving a greater understanding of how shapes behave could lead to more bio engineering solutions in the future.