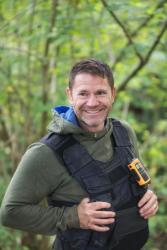 Known for programmes such as Deadly 60, Expedition and Blue Planet Live, Steve Backshall will teach students about conservation, zoology and the wildlife filming industry.

Speaking about why he chose to teach at Bangor University, Steve Backshall said: “After looking around at lots of universities I’ve realised that if I had my time again I would have wanted to come to Bangor University.

“The teaching and courses Bangor offers are second to none – and its focus on ‘whole animal’ zoology is key to us being able to understand the natural world better.”

“North Wales is also one of my favourite places, and I visit the area regularly, so joining up with Bangor University is the natural fit for me,” he added.

Teaming-up with Steve during his sessions at Bangor University will be senior lecturer, Dr Christian Dunn.

“I can’t really emphasise enough just how great it will be for our students to be given lectures by Steve Backshall,” Dr Dunn said.

“His knowledge and experience in zoology and conservation is world-leading and we’re incredibly pleased to be working with such a passionate presenter.

“The only issue we have is getting our timetabling department to work around Steve’s filming commitments because, as you can imagine, he’s very much in demand!” Dr Dunn added.

Steve is currently working on a major Shark conservation documentary series with SKY TV, and even though he is busy, plans are now in place for Steve to give a series of lectures to students from the College of Environmental Sciences and Engineering (CoESE).

Marketing manager for CoESE, Stevie Scanlan, said: “We’re always looking for ways to provide our students with the best possible learning experience, and getting Steve Backshall involved with the teaching team certainly does that.

“We’re all looking forward to working closely with Steve – and really excited about the future!”

Dean of CoESE, Prof Morag McDonald, said: “Steve’s lectures are certainly going to be amongst the most popular we have this year – and we’re already discussing how to build on this; with live feeds from Steve’s filming locations and fieldtrips with Steve over the years