Uganda fails to fill its honey-pot 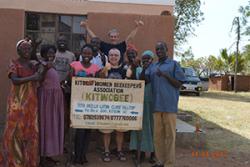 The Kitgum women beekeepers association is using beekeeping as a post-war recovery strategy. A big applause for these corageous women during the visit by Deborah Amulen, Guy Smagghe and Paul Cross (centre, rear).

Despite the large economic potential for honey production, many beekeepers in Uganda fail to produce and market enough honey to make a living from it.

Researchers comparing the household economies of marginal farmers in Uganda, have found that honey adds to the household income of many beekeepers yet this impact is still limited. Beehives were donated to poor households in the communities for them to improve their livelihoods given the lack of alternative income generating activities and the adverse effects of climate change on their traditional agricultural production.

The researchers suggest that beekeepers could make even more income from honey if they would be provided with more on-going training, equipment and support in using the modern beehives, most of which are donated or provided from charities or via government agencies.

Writing in PLoS ONE, Paul Cross from  the University, along with colleagues in Ghent University and Makerere University, concludes that the impact of beekeeping on income could be even larger if more ongoing support would be provided to beekeepers so that they are able to reap a greater profit or contribution to the household income, from the honey and other hive products, and that they should monitor their success rate over a longer time-period.

“As a beekeeper myself, I know that there’s a lot to learn about how to manage modern hives,” explains Cross of 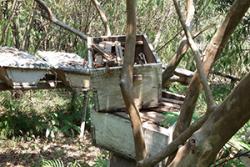 “From our experience, for Uganda to achieve the potential honey production, small scale farmers would need more support in terms of protective clothing and equipment and on-going practical training  and support to enable them to benefit fully from these donations of modern more productive hives.”

Deborah Ruth Amulen a lecturer at Makerere University currently a PhD student of Ghent University, also studying at Bangor University, said: “There is still hope for beekeeping in Uganda, since farmers are very interested, they only need the right blend of support to succeed. Besides the high unemployment among these communities makes them yearn for meaningful livelihood alternatives and in the spirit of climate smart agriculture, beekeeping is a suitable choice”.

Guy Smagghe of Ghent University, said: “Yes indeed there is much of potential especially in northern Uganda honey to market as organic honey to Europe. This extra income can sustain also a stable social community. The successful communities we visited in Kitgum for instance, can work as examples for the whole area. However, there is need for more and better on-going training in good beekeeping practices and diseases monitoring and control.” 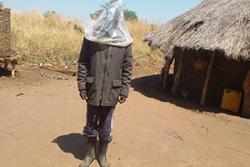 A beekeeper in Kitgum district demonstrates how he dresses up to harvest honey from the beehives: Image credit:Deborah AmulenUganda currently harvests only 1% of a potential 500,000 tonnes of honey per year. Despite being only one of five countries in sub-Saharan Africa licenced to export honey to the EU, Uganda has failed to meet home-grown demands for honey, let alone export to this potential market.

The scientists’ socio-economic analysis of household incomes looked at bee-keepers and non-beekeepers within the same or similar communities. Those who were keeping bees were either using traditional hives, or a few modern hives. The research evidence suggests that the hives had been donated to the very poorest marginal farming households.

The research showed that those households which were keeping bees were relatively less wealthy that the non-beekeepers, and the hives were not making a significant contribution to improving their economic situation, contributing only 7% to the household income. They were not -- yet -- achieving their aims of increasing their household nutrition (in a country where sugar and cooking oil are perceived as luxury goods) or increasing their household income. The research suggests that this is due to a lack of knowledge and additional inputs that may be needed to increase honey production and enable its marketing.

Beekeeping alone may not be sufficient to alleviate the economic challenges faced by the poorest farmers, and if it is to be successful farmers need more training in hive management.