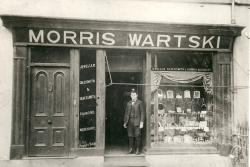 An early image of Bangor's Wartski's shop; part of the exhibition visiting the National Assembly for Wales in Cardiff. An exhibition illustrating Bangor’s Jewish history is travelling to Cardiff.

Titled A Jewish History of Bangor, the exhibition celebrates the presence of Jews in Bangor from medieval times to the Second World War (and beyond).

At the invitation of the Deputy Minister and Chief Whip, Jane Hutt, it will be on display from 11th until 18th November in the Pierhead Building, Cardiff Bay, Cardiff. All are welcome and it’s free.

The exhibition was the product of a joint collaboration between project supervisor, Professor Nathan Abrams of the School of Music and Media at Bangor University, and Gareth Roberts of The Menter Fachwen Walk and Discover Project.

Local residents are encouraged to learn more about the history of Bangor’s Jewish community, which dates back to the mid-nineteenth century, and includes the well-known stores, Wartski’s and Pollecoff’s.

Abrams added, “It’s right there in front of our eyes but hidden in plain sight. And this exhibition helps to record this history.”

Jews fleeing the Nazis settled in Bangor or were evacuated to the city during World War II.

“The exhibition was funded by the Bangor University Economic and Social Research Council Impact Acceleration Account to which we are very grateful. It has helped to transform my long-standing interest and research into the Jewish history of Bangor into these tangible items.”

“There has been so much focus on south Wales and Cardiff audience, that it’s important to redress the balance by revealing more about Jewish communities in north Wales.

Ideally, we would like to join all these histories together into a pan-Wales exhibition, covering all the Jewish communities north and south, but we are in need of more funding. Please do come forward if interested,”