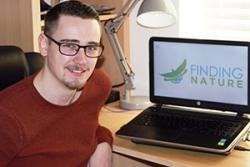 Robert BrookeA Bangor University alumnus has recently launched a website that provides information about Britain’s wildlife to offer activities that let customers find their favourite animals in the wild.

Robert Brook from Blackpool, came up with the idea whilst on his final year at the School of Ocean Sciences. He pitched the concept of Finding Nature during the University’s Santander Entrepreneurship competition where he became a runner-up. He was awarded £500 to pursue the business further and then partnered with his cousin, Adam Kinder, a professional web designer who built Finding Nature’s platform.

Robert said: “Finding Nature prides itself on its commitment to animal welfare and has partnered with tour operators across the UK to deliver unforgettable experiences for anyone interested in wildlife.

“It’s great knowing that we have a platform that can educate people about the UK’s wildlife. But, to be able to offer activities where you can experience the wildlife up-close is just fantastic. It’s something that you simply cannot replace with pictures on a screen.”

About working on Finding Nature, Adam said: “It’s a really unique concept, I was excited to get involved with it. I knew that anybody who is even slightly interested in wildlife would really love something like this.”

Based in Blackpool, Lancashire, Finding Nature is an online platform where visitors can learn about the UK’s wildlife as well as the best places and activities to go out and enjoy it. The company was founded in May 2017 and currently lists over 100 animal species that can be found in more than 40 distinct locations across Britain.