‘Once in a lifetime’ rainforest research trip 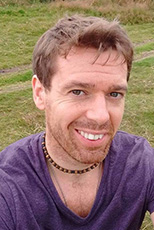 Six days after getting married, lecturer Simon Willcock left his wife for a once in a lifetime trip to a ’lost world’- an isolated rainforest atop a large outcrop of volcanic rock in Mozambique.

A lecturer in Environmental Geography at Bangor University, since his PhD Simon has worked with a network of leading scientists whose interest include the study of remote and undisturbed rainforests.

While some of the other team members are interested in the new species which may have evolved through isolation, Simon’s contribution is to study the carbon stored in a virtually undisturbed rainforest, to see how climate change is affecting this forest by testing the soil.

“I’m interested in ecosystem services, those essential things that the nature contributes, which we should not take for granted; for example, tropical forest soils lock up vast amounts of carbon, which if cleared, would be released into the atmosphere as carbon dioxide and contribute further to climate change. 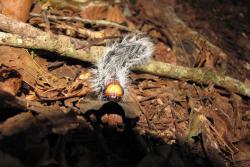 A caterpillar on Mount LicoEven when we survey what we think are pristine rainforests, we sometimes come across pits or furrows, which reveal that the land has once been farmed but has since reverted to rainforest- so we are less able to quantify what changes are due to recovery from this past disturbance or are due to climate change. An isolated forest such as Mount Lico gives us a unique opportunity to study how past changes in climate have affected tropical forests.”

One of Simon’s tasks was to dig down through the soil to collect samples for later analysis.

“You’d expect thin soils on a rocky outcrop, but what we found went beyond our expectations. The soil was so deep that we dug down through two metres and ran out of sample tins before reaching bedrock.”

Simon and other colleagues will now be analysing the soil samples to reveal, not only the age of the decomposed matter that makes up the soil, but also the carbon levels at different soil depths. By studying the pollen and charcoal present in the soil profile, these researchers will be able to understand key events in Mount Lico’s past – How long has the forest been there? How has the 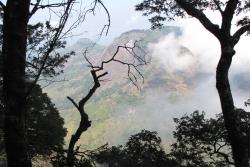 A view of Mount Licochanging climate affected the forest? The ongoing research will answer questions such as these and many more.

Reflecting on the trip, Simon commented:

“It was a privilege, and a unique and humbling experience.”

He likened the forest to an old cathedral or ancient monument, with the tree trunks like columns and their canopies closing overhead like a vaulting cathedral roof.

“There were fewer birds there than we expected, so it was also calm and peaceful, and there was a majesty that you don’t get anywhere else,” he said.

The scientists were assisted by two climbers and were accompanied by a film crew- so look out for the documentary which will surely follow!

As for Simon, he and his wife are to enjoy a belated African honeymoon in August.