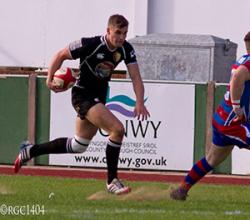 James Lang from Surrey was studying Sport Science in St Mary’s University in Twickenham, when he was approached by Rupert Moon, Welsh Rugby Union General Manager for the North Wales development region.

“I finished my first year of studies at St Mary’s University. I have played rugby for eight years, and was capped for Scotland Under-18 last year. I was able to play for Scotland as my mother is Scottish. I’ve also represented Harlequins Academy and played for London Scottish Football Club.”

James decided to transfer his studies to Bangor University, and is now in his second year of his Sport Science degree.

“After RGC (Rygbi Gogledd Cymru) got in contact it was a straight forward transfer. I wanted to continue my studies as well as playing rugby, and it’s a bonus that Bangor is one of the best universities for my course,” he said.

The 19 year old student is qualified to play for Wales through his father, who hails from Penarth.  James, who hopes to get capped for Wales Under-20 this season, has been balancing his studies and training well.

“There hasn’t been any problem so far, training doesn’t clash with lectures which is good, and I just have to study in my free time to keep on top of things,” he said.

The rugby player is pleased with the move to north Wales and has settled in well.

“The lecturers are very helpful here in Bangor, and it is one of the top universities in the UK. Everything is close in town and everyone seems friendly. I’m really enjoying my time here.”

After graduating, James is hoping to pursue his passion for sport.

“If rugby doesn’t go any further for me, I would look into sports psychology in the future as it interests me a lot.”