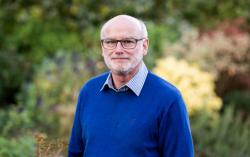 The highly qualified jobs will be at the university’s Nuclear Futures Institute and have recharged the region’s nuclear ambitions after the disappointment of Hitachi’s pull-out from the Wylfa Two project.

The cash injection has been welcomed by NFI Director Professor Bill Lee, one of the UK’s leading nuclear scientists, who says it will enable the university to expand its work in the nuclear field into medicine, control and instrumentation, structural materials and fusion energy.

He said that it could open the doors to further investment of hundreds of millions of pounds across North Wales as the region becomes one of the UK’s carbon-free energy hubs.

“If we are going to convert the whole country to electricity for transport and home heating by 2050 then we are going to have to double or even treble current capacity so we will need wind, solar, hydro and nuclear and we have them all here in North Wales – then you can wind down coal, gas and oil,” he said.

The money for the new positions comes from the Welsh Government’s Sêr Cymru programme and the European Regional Development Fund and the University is also funding one additional post at the Institute.

Professor Lee, formerly at Imperial College London and one of the world's top material scientists, added: "This support from the Welsh Government and Europe gives us a real opportunity to put Bangor University at the heart of developments in low carbon energy.

“This is a great opportunity for North Wales, providing excellent research and training infrastructure along with a much more significant nuclear programme.

“It’s a key benefit for North Wales that we have two licensed nuclear sites at Wylfa and Trawsfynydd and although Hitachi-GE pulled out of the Wylfa Newydd project there are ongoing conversations with other companies – that site will be used by someone.”

The NFI was set up in 2017 to focus on research into nuclear technologies in North Wales where nuclear energy has played a key role at Wylfa and Trawsfynydd and where the University and the M-SParc science park provide academic and industrial support.

The new investment will help NFI expand into the fields of nuclear medicine, using radioactive chemicals to diagnose and treat heart disease and many cancers, structural materials, to prevent radioactive leaks from nuclear reactors, and nuclear fusion.

Professor Lee said: “The new appointments will become part of a world-leading team supporting large regional projects funded through the North Wales Growth Deal such as the Low Carbon Energy Centre of Excellence at M-SParc on Anglesey.

“There are also significant projects such as the National Thermal Hydraulics Facility slated for North Wales in the Nuclear Sector Deal.

“There are a number of elements you need to worry about when developing the sort of capability we need here, including money and facilities but the most important is people and this investment in people gives Bangor a head start.”

He has been backed by Welsh Education Minister Kirsty Williams who said: “I’m pleased our Sêr Cymru scheme can support this programme at Bangor University, creating several high-quality jobs and strengthening the University’s research base even further.”