Graduating student Jonathan Hedge has spent the last six months working on designs for a power pack for developing countries, in collaboration with the charity International Health Partners and the company Mobile Power Solutions.

The prototypes he has developed aim to provide people who traditionally rely upon kerosene for lighting to switch to safer and more economical means of illuminating their homes and at the same time charge their mobile phones—themselves a lifeline in poor rural areas.
The project involved designing both a power pack and light and a secure means of charging the pack at charging stations operated by the charity and its partners. Jonathan’s work has impressed the company and several of his innovations are likely to be incorporated in future products to be rolled out, initially in Tanzania and later in Rwanda, Uganda and elsewhere. 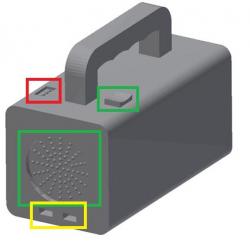