This article by Jeff Kettle,  ‎Lecturer in Electronic Engineering,  was originally published on The Conversation. Read the original article.

It could herald a great leap forward in the way we live our lives. The internet of things, the idea that objects can be interconnected via a global network, will run your home, keep you healthy and even check how much food is in your fridge. It will mean a trillion new “smart sensors” being installed around the world by 2020. But what’s going to power these devices?

In some cases, the energy source is obvious: sensors in fridges or traffic lights can simply tap into mains electricity. But it’s much trickier to power something that detects water quality in remote reservoirs, cracks in railway lines, or whether a farmer’s cows are happy and healthy. 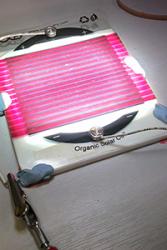 Organic Solar cells: image courtesy of Iwan Saunders Jones.Organic solar panels might be the answer. They’re cheap, and are flexible enough to power minuscule sensors whatever their shape. The cells can be just two micrometres thick – around a 50th the width of a human hair – but they are able to absorb a huge amount of light for such a thin surface.

These organic photovoltaics (OPVs) differ from silicon solar cells as they can be made entirely from specially-synthesised organic materials, which are deposited onto cheap substrates such as PET, a form of polyester also used in soft drink bottles and crisp packets. This material is lighter, more flexible and can even be tuned to provide different colours – who said solar cells have to be plain black?

Critically, it takes just one day for OPVs to earn back the energy invested in their manufacture, known as the “energy payback time”, which compares to around one to two years for regular silicon solar cells.

Organic photovoltaics can also be moulded onto 3-D surfaces such as roof tiling or even clothing. In our latest research, colleagues and I demonstrated that this makes them more effective at capturing diffuse or slanting light. This wouldn’t make much difference for a regular solar farm in a sunny country, but cloudier places at higher latitudes would see benefits.

For the internet of things, however, these improvements are a game-changer. Few of those trillion sensors will be placed conveniently in the sunshine, facing upwards; far more will be in unusual locations where light only falls indirectly. Tiny organic solar cells will enable energy to be captured throughout the day, even indoors or when attached to clothes.

From billions to a trillion

There’s no denying the huge need for such a technology. The “trillion sensors” figure at first seems outlandish, but consider the fact that a typical smartphone, for example, possesses around ten smart sensors that measure light, temperature, sound, touch, movement, position, humidity and more. More than a billion smartphones will be sold this year, so that’s 10 billion new sensors just in phones. And not all smart sensors are confined to smartphones, of course; they are already routinely used in personal care, environmental monitoring, security and transport.

Whatever the exact numbers, we can assume that many, many more sensors will be deployed in future and their complexity and usefulness is growing exponentially. My colleagues and I at Bangor are interested in how we could power them all, which is what led us to organic solar.

Though engineers will always try to reduce energy consumption through better design and putting sensors to “sleep” when they are not required, even ultra-low power sensors still consume around 3.5mW (milliWatts) per measurement. Poorer quality sensors might use considerably more.

Now assuming the “average” sensor actually consumes 5mW per measurement, and assuming one measurement is made every minute and takes 30 seconds to complete, this average smart sensor will need 22 Wh (watt-hours) in a calendar year. On it’s own, this is not a substantial value and equivalent to running your TV for about five minutes.

But it all adds up. Based on this simple analysis, 1 trillion sensors will use 21,900 Gigawatt hours (GWh) per year. That’s an incredible demand on electricity grids, equivalent to the combined output from a few typical nuclear power plants. This is all before considering the extra demand needed by data centres to handle and store such large sums of information.

Yes, low-power electronics will be developed that should reduce the amount of energy that the sensors need. But, for long term operation, many sensors can’t rely upon an internal battery, as a battery has a finite energy store. This is particularly pertinent as many smart sensors may be placed in remote locations, often far from the electricity grid or without a power connection.

Therefore we must create smart sensors that can harvest their own energy from the local environment – and it’s here that organic solar technology will find its niche.