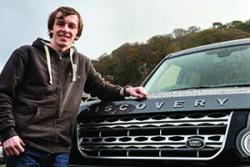 Peter Doggart, 22, from Belfast, Northern Ireland has commenced the fourth year of his MEng degree at Bangor University’s School of Electronic Engineering. During his second year, Peter was successfully recruited for the sponsorship scheme following a rigorous day of role plays, team exercises, psychometric testing and an interview.

The Jaguar Land Rover sponsorship scheme is open to any student on an Electrical related Engineering degree and lasts for the length of the student’s degree. The scheme enables the student to work at one of Jaguar Land Rover's sites for 12 weeks each summer, from when they sign up until they graduate, with a special fast track onto the graduate program on graduation.

As part of the scheme, interns receive a working salary of £300 per week (£15,600 p.a) for the 12 weeks they are working, as well as a £1500 bursary payment to return to university providing they agree to return the following summer or are accepted onto the graduate program. Returning placement students also have the added advantage of having first pick of which department they want to spend the summer in, enabling them to choose something they are really interested in or would like to learn more about.

“My course at Bangor doesn't involve a professional placement but the chance to come and work for a world leading company each summer is just too good of an opportunity to pass up! Having the chance to go and work in industry whilst at university has given me a great insight into how projects are planned and run in the real world which has really helped me get my university work done. It has also shown me that my degree has real value, I definitely wouldn't be able to complete the work I am doing without the knowledge I have learnt during my time in Bangor. The opposite is also true; being around other professionals has shown me new ways of thinking and doing things which I will definitely take back and apply to my university work. My placement has also emphasized how important being a team player is, which I hope will help with my final year project.

“This is my second summer at Jaguar Land Rover. This year I am working with their Research Team: Peerless Effortless All Terrain (PEAT). The PEAT team are focusing on building new technologies into cars which assist you as the driver rather than completely taking over control of the car as in the autonomous case. With ever increasing interest in the automotive world heading towards autonomous driving technologies, customers especially in the off-road environment, want to engage with the vehicle rather than to just be driven by it.

“I have been working on my own project which I chose from a list of suggestions when I started, as well as helping out part-time on another ongoing project in the team. Due to the nature of the department, I’m not at liberty to discuss what I’m working on exactly, but it is definitely applying the skills I have learnt at university on both the electronics and computer science side of my degree.

“In my previous summer placement, I was working alongside the Jaguar Land Rover Electrical Quality team who are responsible for maintaining the high quality image of the company and their products. Electrical Quality is a sub-team who oversee operations of the Electrical Engineering department. This placement was very data driven based on warranty reports and other quality indicators, but also involved several weeks of hands on experience in both the Solihull and Castle Bromwich manufacturing facilities which was an amazing experience.

“Being able to spend some time on the Jaguar Land Rover manufacturing sites really was an eye opening experience, and something that not many people outside of the company get to see. As engineering students, we design and build things all of the time but have very little understanding or experience on how mass producing products works.

“When you go to a manufacturing site, it’s an amazing experience just to watch a car, which has been designed by engineers just like us, being built from scratch in front of your eyes and at an amazing speed. It gives you a great appreciation of all of the hard work and man hours that go into designing a car and the processes to build it and seeing the end product that will be delivered to customers certainly gives me the drive to make sure whatever work I am doing is always the best I can do.”

Dr Jeff Kettle, Peter’s Personal Tutor, said: “There were only around 12 candidates selected from across the UK.  His interviewers were highly impressed; he was the only candidate out of 30 who every interviewer agreed should be given the sponsorship.

“The placement is really testament to Pete's hard work, enthusiasm and ability. His grades have been excellent since starting at Bangor, where he has developed his technical knowledge on the subject. He has also been able to advance additional skills that employers are looking from engineering graduates such as communication and interpersonal skills.”