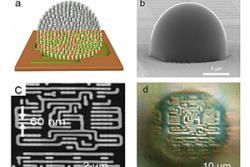 (a) Conceptual drawing of nanoparticle-based metamaterial solid immersion lens (mSIL) (b) Lab made mSIL (c) SEM image of 60 nm sized imaging sample (d) corresponding superlens imaging of the 60 nm samples by the developed mSIL.Nanobeads are all around us- and are, some might argue, used too frequently in everything from sun-screen to white paint, but a new ground-breaking application is revealing hidden worlds.

A paper in Science Advances (12 August) provides proof of a new concept, using new solid 3D superlenses to break through the scale of things previously visible through a microscope.

Illustrating the strength of the new superlens, the scientists describe seeing for the first time, the actual information on the surface of a Blue Ray DVD. That shiny surface is not as smooth as we think. Current microscopes cannot see the grooves containing the data- but now even the data itself is revealed.

Led by Dr Zengbo Wang at Bangor University UK and Prof Limin Wu at Fudan University, China, the team created minute droplet-like lens structures on the surface to be examined. These act as an additional lens to magnify the surface features previously invisible to a normal lens.

Made of millions of nanobeads, the spheres break up the light beam. Each bead refracts the light, acting as individual torch-like minute beam. It is the very small size of each beam of light which illuminate the surface, extending the resolving ability of the microscope to record-breaking levels. The new superlens adds 5x magnification on top of existing microscopes.

Extending the limit of classical microscope’s resolution has been the ‘El Dorado’ or ‘Holy Grail’ of microscopy for over a century. Physical laws of light make it impossible to view objects smaller than 200 nm – the smallest size of bacteria, using a normal microscope alone. However, superlenses have been the new goal since the turn of the millennium, with various labs and teams researching different models and materials.

“We’ve used high-index titanium dioxide (TiO2) nanoparticles as the building element of the lens. These nanoparticles are able to bend light to a higher degree than water. To explain, when putting a spoon into a cup of this material, if it were possible, you’d see a larger bend where you spoon enters the material than you would looking at the same spoon in a glass of water,” Dr Wang says.

Nanoparticles splitting single incident beam into multiple beams which provides optical super-resolution in imaging.“Each sphere bends the light to a high magnitude and splits the light beam, creating millions of individual beams of light. It is these tiny light beams which enable us to view previously unseen detail.”

Wang believes that the results will be easily replicable and that other labs will soon be adopting the technology and using it for themselves.

The advantages of the technology is that the material, titanium dioxide, is cheap and readily available, and rather than buying a new microscope, the lenses are applied to the material to be viewed, rather than to the microscope.

“We have already viewed details to a far greater level than was previously possible. The next challenge is to adapt the technology for use in biology and medicine. This would not require the current use of a combination of dyes and stains and laser light- which change the samples being viewed. The new lens will be used to see germs and viruses not previously visible.”

The news now appears in more than 6000 Chinese websites.