Nuclear power has provided low-carbon electricity to the UK for over 60 years and today it generates 17% of the country’s electricity. Until mid-2018, 15 nuclear reactors were the country’s largest source of low-carbon energy. Of these, only Sizewell B is planned to remain operating in 12 years’ time. The only new plant under construction is Hinkley Point C, and with a total generating capacity of 3.26 gigawatts, it would provide just 8% of the UK’s current electricity demand.

The Committee on Climate Change advises the UK government on the effort to reach net-zero emissions by 2050. Its proposals are strangely silent on nuclear power, occasionally lumping it in with “other low-carbon generation”. It supports a massive increase in renewable energy generation and continued burning of natural gas, using carbon capture and storage technology to mop up the CO₂ emitted. Elsewhere, the plan is to electrify transport, heating and industrial processes, meaning batteries in cars, and heat pumps powered by electricity in homes and factories.

While reducing the amount of gas and oil burned, this would at least double the amount of electricity the national grid will need by 2050. Perhaps this could be met with renewables and electricity storage in batteries, to cover those moments when the Sun isn’t shining and there’s no wind to generate green energy. But sadly, battery technology isn’t currently powerful enough to store energy at that scale.

Even today’s largest battery stores can only provide back-up electricity for a few hours, which is not always enough to cover extended periods of low wind or shorter daylight hours during winter. Battery technology is improving all the time, but it may not do so fast enough to meet rising electricity demand. Rolling out lots of electric vehicles could squeeze the supply of batteries even further, potentially even increasing their cost.

Carbon capture and storage is not a proven technology either, so it would be unwise to put too many of eggs in that basket. Aside from other technical issues – storing the CO₂ produced by burning natural gas is a potential safety hazard – the unexpected release of gas stored underground could suffocate life at the surface. While plans are afoot to make “green hydrogen” the new lifeblood of the economy, producing enough of the low-carbon fuel would take a lot of electricity. Can renewables generate enough to do that while having enough left over for the surge in electricity demand elsewhere?

A new generation of reactors

Future nuclear reactors will not just be big kettles making steam to drive turbines that generate electricity. The heat produced during the nuclear reaction can be diverted to power processes that are currently difficult to decarbonise.

Take heating in buildings, for example. Heat cooler than 400°C can be extracted after the turbine, and pumped into district heating systems, replacing fossil fuels like natural gas. This is a process that is already carried out daily from municipal waste incinerators across Europe.

High-temperature heat (between 400 and 900°C) could be diverted from nearer the reactor, before it reaches the turbine in a nuclear plant. It could be used to power processes that produce low-carbon hydrogen fuel, ammonia and synthetic fuels for ships and jets. This heat could also supply industries such as steel, cement, glass and chemical manufacturing, which often otherwise use burners powered by fossil fuels.

This flexibility links perfectly with renewables. While the sun is shining and the wind’s blowing, nuclear reactors can continue generating hydrogen or other fuels that serve as an energy store – a standby source that can be burned to generate additional energy when needed. That energy could also heat homes or produce aluminium, steel, bricks, cement and glass. When it’s cloudy and still, the reactor can still generate electricity for the grid. 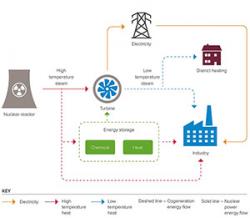 Nuclear reactors have evolved to achieve more than just electricity generation. : Royal Society, Author providedThe smaller reactors currently being developed worldwide typically generate about 300 megawatts of electricity each. They’re much cheaper to build than the current fleet of larger reactors which generate over 1,000 megawatts, such as the UK’s Hinkley Point C. Because they burn the fuel more efficiently, this new generation of reactors also produces much less nuclear waste.

Many contain passive safety measures too, which can flood an overheating reactor with cool water or remove the fuel source if there’s a problem. They’re designed to serve multiple purposes, either making electricity for the grid when renewable generation is low or making hydrogen and other fuels when it’s high. Because they’re smaller, these reactors can even be placed in industrial parks, providing a guaranteed electricity and heat supply to neighbouring factories.

We don’t believe that reaching net-zero emissions within the time we have left is possible without building new nuclear reactors. Fortunately, the new models awaiting construction can do so much more than just generate electricity.