The cold, remote Arctic Ocean and its surrounding marginal seas have experienced climate change at a rate not seen at lower latitudes. Warming air, land and sea temperatures, and large declines in seasonal Arctic sea ice cover are all symptoms of the changing Arctic climate. Although these changes are occurring in relatively remote locations, there is growing evidence to link Arctic sea ice retreat to increasingly erratic weather patterns over the northern hemisphere.

Water flowing north from the Atlantic Ocean provides a major source of heat to the Arctic Ocean and surrounding continental shelf seas. While the Atlantic Water (the particular water mass in the Arctic ocean) carries enough heat to melt all the floating Arctic sea ice in less than five years, it is currently insulated from the surface by a lighter, fresher layer of water over most of the central Arctic Ocean.

However, this paradigm appears to be changing. North of Svalbard, Atlantic Water heat has been mixed up towards the surface, resulting in increased surface heat lost to the atmosphere over the ever greater area of open ocean. This change has recently been shown to enhance the rate of sea ice loss eastwards.

In the Barents Sea, sea ice forms every autumn and melts in late spring/summer. In the northern part of the sea, a north-south change from cold to warm sea surface temperatures signals the presence of the Polar Front, which separates cold Arctic water from the warm Atlantic water. The meeting of the two water masses, its location and the temperature difference across it reflects changes in Barents Sea circulation.

During years with low seasonal sea ice concentrations (when there’s more heat loss from more exposed open water), the north-south differences in atmospheric temperatures across the Barents Sea are reduced. These conditions have been linked to wintertime cyclonestravelling further south into western Europe, instead of their tendency to move eastwards towards Siberia, as well as more frequent cold winter extremes at middle latitudes.

For our recent study, we looked at satellite measurements of sea ice and sea surface temperature, to determine how ocean and ice conditions have evolved between 1985 and the end of 2016. We found that prior to 2005, sea ice extended south of the Polar Front every winter, but that since 2005 this has not been the case. 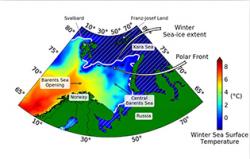 Winter-averaged sea surface temperature and sea ice extent as observed in the Barents Sea by satellites from 2005 and 2016.Long-term oceanographic measurements of water temperature and salinity near the Barents Sea Opening have shown that inflowing Atlantic Water temperatures have increased over the last 30 years, with what appears to be a small but persistent rise around 2005 – likely to be due to upstream changes in the North Atlantic sources (though it must be noted that our study did not explore this question). An impact of the warmer water entering the Barents Sea is a warmer atmosphere, which in turn insulates the warmer surface water allowing the Atlantic Water heat to penetrate further to the north, preventing winter sea ice formation and import (that is sea ice that has formed farther north that has drifted southwards) to the region south of the Polar Front.

We believe that this represents a long-term shift in the climate of the Barents Sea, a region already identified as influential on lower-latitude European weather. Furthermore, we believe that the 2005 regime shift we observed over the Barents Sea may have contributed to the increasingly frequent extreme weather events experienced over Europe in the past decade or so.