Every year Bangor University’s Alumni Advisory Board considers candidates and advises the University on an Alumnus of the Year award. The award recognises outstanding achievement by a Bangor graduate in his/her chosen field, particularly highlighting those who retain an active association with the University after graduation. 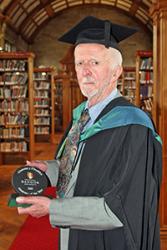 Ray FootmanBangor University was proud to present Ray Footman with 2017’s Alumnus of the Year award during graduation week. Ray is a 1961 alumnus of History and Philosophy and served as Bangor’s Students’ Union President 1961-62. He is a former member and Chair of the Alumni Advisory Board and was instrumental in its development. Ray has supported the University’s Development and Alumni Relations Office over the years by organising reunions and events in Bangor and Edinburgh and has always been a great ambassador for Bangor University.

Ray joined Edinburgh University in 1969 as Head of Information for the Committee of Vice-Chancellors and Principals (CVCP). In 1976, he was recruited to run the University’s new information office. In his role, Ray was key in laying the foundations of the newly developing Development and Alumni Relations field in the UK. In 1982, in preparation for Edinburgh’s 400th anniversary, Ray paid a six week visit to universities in the US and Canada to see how PR, alumni relations and fundraising were handled. The successful organisation of the anniversary celebrations led to an expansion of Edinburgh’s information office and the addition of an Alumni Officer, one of the earliest such full time appointments in the country. An appeal for funds connected to the anniversary raised £440,000 which resulted in the establishment of one of the earliest modern fundraising offices in a UK university. Ray was Director of Communications and Public Relations at the University of Edinburgh until his retirement in 2002.

He also played an important role in helping to develop the Council for the Advancement and Support of Education [CASE Europe] – an international association for alumni and marketing professionals – and he was to serve as Chair of the Board of Trustees of CASE [Europe], receiving the CASE Europe Frank Ashmore Award in 2001 for his services to educational advancement.

Ray’s wife Els, also a former Bangor student, son and daughter-in-law attended the ceremony to see him receive his award which was presented with a citation by Dr David Roberts, former Registrar of Bangor University.

On receiving his award, Ray said “I am delighted to be named as Bangor University’s Alumnus of the Year. I have always been proud of my connections with Bangor and I am honoured to receive this award.”