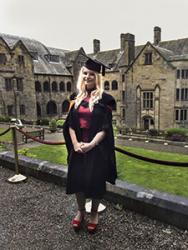 Keira HandA Bangor University student graduating this week is feeling happy having had an amazing three years at university.

Former Yale College student, Keira Jayne Hand, 21, from Rhosllanerchrugog, Wrexham, will be graduating with a first class LLB Law degree. Keira demonstrated outstanding commitments to volunteering whilst at university and was awarded an individual High Sheriff award in recognition of her commitment to Street Law as its director. Keira’s team members nominated her as they believe her to be amazingly organised, enthusiastic and committed to the group and credit her responsible for the group’s growth.

Keira said: “Whilst studying at Bangor I took part in a number of extra-curricular activities. I took part in mooting competitions which see students preparing and presenting a case before a judge. I won three moots in Bangor and took part in the national Oxford University Press Moot. I also took part in the Law School’s Innocence Casework Unit which allowed me to work on real criminal cases. Whilst at Bangor, I completed several internships and work placements including a mini-pupillage at a barrister’s chambers, Judge shadowing at the County Court and work at solicitors firms. I threw myself into any activity that reflected my passion for law which has proved incredibly valuable.

“The Law School have been so encouraging and go above and beyond to ensure that we get the most out of our time as law students. I have had such an amazing three years at Bangor.

“The day after my final law exam I was offered the opportunity to join Freeman Jones Solicitors as part of their Trainee Solicitor Programme. I have been working at Freeman Jones as a Paralegal since the beginning of June, working primarily in wills and probate, family law and litigation. I plan to continue to do this and gain more and more experience until I complete the Legal Practice Course which I will begin studying on weekends in September before qualifying as a solicitor with them. I have been given such an incredible opportunity and couldn’t have done it without the help and support that I received from both Bangor Law School and my family.”