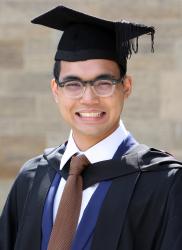 How does it feel to be graduating?
Scary, exciting, and sad all at the same time. There was never a dull moment at University, and I owe it all to the people that I’ve met and who have supported me. It’s scary how three years have zipped by in the blink of an eye. This feeling of melancholy also sprouts from the realisation that I won’t ever have an experience quite like this ever again.

Background…
I’m the oldest child of five siblings, and the sixth oldest grandchild of my 29 cousins on my mother’s side of the family. I didn’t expect to go to university, let alone studying abroad! Nonetheless, I put a brave foot forward and silenced my fears and doubts with a positive attitude. I’m happy to say that this attitude has enabled me to make a number of good friends and connections that enriched my university life. I was first interested in studying the environment after realising how bad air pollution can get in Malaysia during one of our hazy seasons. I was initially interested in being an air quality chemist but eventually wanted study the environment.

Why Bangor?
The first reason I chose Bangor University was the course’s credibility. The Environmental Science degree was accredited by the Institution of Environmental Sciences, making it a very well-rounded and professional course to pursue. The more I explored Bangor, the more I found out about things that complimented the course. From Snowdonia being the local backyard to the free sports and societies and the abundant field trips.

Projects and Work Experience...
I worked for the University’s Marketing Department, assisting during open days and welcome week. I have also worked as a Digital Ambassador which was fun – sharing my student experience on social media. I’ve done summer internships outside of term time which were rewarding and have given me excellent skills for when I leave university.

Most of my work experience has been in my home country of Malaysia. I facilitated the Liter of Light project in Malaysia – building solar-powered lamps for the indigenous villages. This was a full-time job, where I assisted my supervisor at a sustainability consultancy firm in Kuala Lumpur.

I also attended project WHEE!, which was an agricultural data survey trip to an indigenous rice village.

Clubs & Societies...
With Bangor University having FREE clubs and societies, I was involved with many! In my first year, I was quite actively involved with BEDS - the Drama Society, picked up beginner gymnastics and volunteered at Penrhyn Castle and Treborth Botanic Gardens. During my second year, I was also involved with SODA, the musical society, which was probably one of the best decisions I have ever made. I had also been elected secretary for the Students for Treborth Action Group (STAG) and the Geography Society (GeogSoc). In my third year, I dropped the drama and musical societies, and started acting with the Film Society, I stayed on the committee for STAG, stepped down from GeogSoc, but took up a committee role in the Horticulture Organic Garden Society (HOGSoc), as well as ending up on the Volleyball first team at Varsity! Volleyball was the one regret I have at university – for not joining sooner!

Highlights...
My highlights were the field trips, being part of the musical society and Volleyball. I had enjoyed performing so much and performing in a full-on musical was an invaluable experience. I had the roles of Prince Charming in Cinderella and Zeke Baylor in High School Musical. Volleyball was just the sport for me! I enjoyed every second of it. Every training and casual session, the people, and the competitions. The field trips were always a good way of putting or witnessing what we learned to practical use.

The future...
I have a lot of visions and ambitions and hope eventually to work for the United Nations.