Steffie overcomes many obstacles to achieve a first class degree 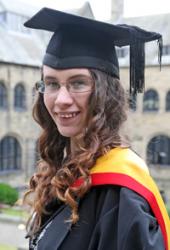 Steffie, 25, explains how she managed to juggle having a baby, health problems, studying and working with the support of the School of Law staff.

She said: “I overcame many obstacles while studying. In my first year, I found a lump in my breast and had surgery to remove the lump. Thankfully it was benign but the waiting put a lot of strain on me. In my second year I began suffering with anxiety and feared leaving the house and was diagnosed with Seasonal Affective Disorder but worked hard to ensure I successfully completed my second year.”

However, the biggest obstacle was pregnancy and a baby in my third year. I found out I was expecting with two exams left to go of my second year. My son was born in January and was 2 weeks early by caesarean section. I completed 4 essays at the end of January and throughout February. I then had to face my dissertation, I spoke to my supervisor who was very supportive and helpful and I completed it within the deadline. Then came the biggest challenge, the five final exams.”

Excited about the prospect of graduating, Steffie said: “I still can’t believe I did it. I’m graduating with a first class degree after the hardest but yet most rewarding year of my life. Not many people can say they achieved everything they wanted from life at 25 but all I’ve ever wanted is to graduate from university and have children of my own. I’ve done both in less than a year. I now get to make some new dreams and look forward to a hopefully bright future.”

The highlight of Steffie’s time at Bangor University was the support she received.  She explained, “The staff in the School of Law have been amazing especially Helen Albert from the administration team.  I must say their support and encouragement are more of a highlight than anything else because I know I would not be graduating without their help and support!”

About her hopes for the future: “I want to become a law lecturer and researcher. I am hoping to return to Bangor University next year to complete a research masters and then I’d like to continue on the path to a PhD in Law.”