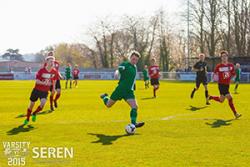 Gavin in action in the 2015 Varsity Match.: Image courtesy of SerenAs the likes of Bale, Ramsey and Hennessey prepare for the forthcoming UEFA Euro 2016 football championships in France, Bangor University student Gavin Lloyd-Jones will also be aiming for the back of the net as a member of the Wales Universities football team.

Gavin, from Caernarfon and a student at the School of Sports, Health and Exercise Science, has been selected to play for the Wales Universities team in their series of friendlies against counterparts from Scotland and Ireland this month. Gavin, who plies his trade as a striker with Welsh Alliance Division 1 side, Llanrug United, is the only Bangor University student in the squad.

Looking ahead to the series, Gavin said:

“I consider it a pleasure to represent Bangor University FC so it was a pleasant surprise and a huge honour to be selected for the Wales Universities team. I'm really looking forward to seeing what the other nations have in store for us in the upcoming matches.”

“It is absolutely amazing that one of our students is being recognised and representing the University at a national level. Our Men's Football team and our Athletic Union cannot wait to support Gavin in these games. Let's Go Bangor!”