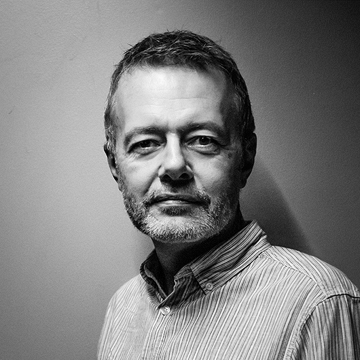 Andrew Lewis is an award-winning composer and an internationally recognised figure in the field of acousmatic composition. His most recent work includes more music for orchestras and ensembles, but retains a strong interest in the phenomenon of sound as raw material and the use of technology to realise new kinds of musical ideas. He is especially interested in spatial sound, in the relationship between 'real-world' and 'abstract' sounds, and in the phenomena of aural perception as part of the creative process.

His music first came to prominence through the award of several international prizes, including the EMAS/PRS Prize for 'Storm-Song' (piano and tape) in 1986, which was also featured at the Gaudeamus Music Week (Amsterdam). Subsequent awards include First Prizes at Concours de Musique Electroacoustique de Bourges, 1997 ('Ascent'); Concurso Internacional ART’S XXI, Valencia, 2001 ('Cable Bay'); Concurso internacional de música eletroacústica, São Paulo, 2003 ('Penmon Point'); KLANG, Montpellier, 2016 ('Fern Hill'); Destellos, Argentina, 2017 ('Skyline') and KLANG, Montpellier, 2018 ('Lebenslieder'). In 2004 he was the recipient of a prestigious 'Euphonie d’Or' at Bourges for one of the ten most significant works of the decade 1995-2004 ('Ascent'), and in the same year his string quartet 'Tempo Reale' was chosen by Sir Peter Maxwell Davies for a Wigmore Hall concert celebrating the 60th anniversary of SPNM.

Recent projects include the audiovisial work 'LEXICON' (funded by the Wellcome Trust) which was seen live by more than 1700 people during its UK tour, and 'Fern Hill' for orchestra and electronics, which was commissioned for the BBC National Orchestra of Wales for the centenary celebrations of Dylan Thomas, and broadcast live on BBC Radio 3. This work won first prize in the KLANG! competition, Montpellier, and was given its French premiere there by the Orchestre national Montpellier Occitanie. In 2016 he was awarded a Leverhulme Research Fellowship to compose a large scale work for orchestra and electronics featuring the voices of people with dementia and their partners who care for them ('Lebenslieder'). The resulting work was awarded second prize in the KLANG! competition, Montpellier, in 2018. In 2019 'Straatmuziek' for flute, clarinet, piano and electronics was one of only two works chosen to represent Wales at the ISCM World Music Days in Estonia. In 2018 he was one of ten composers from Wales commissioned for the debut concert of the UPROAR Ensemble, and in 2020 completed a new commission them for ensemble and electronics, for a tour in the UK and Europe.

Numerous recordings are available, including two collections of his works: 'Miroirs obscurs' and 'Au-dèla' (empreintes DIGITALes) as well as 'Schattenklavier' on Shadow Piano (Innova).  His instrumental and vocal music is published by Composers Edition, and his acousmatic music by Ymx média, Montréal (electrocd.com).

He is married with four grown-up daughters, and lives in Bangor.

I mainly supervise composition PhDs, especially those involving acousmatic music, and music for live instruments with electronics. I am interested in compositional approaches and strategies, technological development of compositional tools (including software development), and aesthetic and cultural issues (for example, the role of perception and cognition in acousmatic music, and the performance and public reception of music involving technology). Examples of recently completed composition PhD projects I have supervised include "Exploring Engagement in Technologically Mediated Music", "Generative Music from Fuzzy Logic and Probability" and "Perception and Structure in Electroacoustic Music".