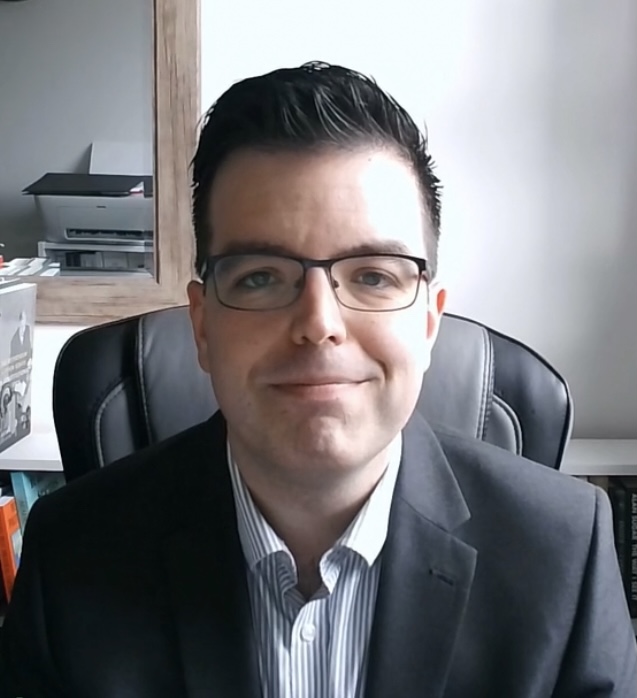 Stephen Clear has been teaching Law at Bangor since 2011. Originally from London, he graduated from the University of Wales in 2010 with a First Class Honours LLB. He subsequently completed an LLM by Research at Bangor University in 2012. Stephen's teaching and research interests are in the areas of: Public Law: Constitutional and Administrative Law; Public Procurement Law; and Legal Education and Mooting.

In September 2021, Stephen was appointed Law Subject Lead in the newly formed School of History, Law and Social Sciences. Prior to that, he served as Bangor Law School's Senior Tutor from 2016 until 2021.

Stephen has held module leadership responsibility for the teaching of Public Law: Constitutional and Administrative Law at Bangor University for the past eight years. Since 2014, Stephen has worked in cooperation with both UK and Welsh parliamentarians, Government officials, and judges in order stage annual field trips to London, in order for his students to practically apply the Public Law concepts explored within his classes. Stephen's interests in Public Law include: matters relating to the future for the UK-Union, and the relationship between devolved administrations and the Westminster Parliament; as well as, more broadly, issues concerning fundamental constitutional principles (the Rule of Law, Separation of Powers, and Parliamentary Sovereignty); Human Rights, and Judicial Review.

Stephen's Public Law research has been published in a variety of journals, including: European Public Law (Wolters Kluwer), European Politeia (EPLO), Legal Studies (Wiley), and the Journal of the Oxford Centre for Socio-Legal Studies (Oxford University). In 2014, Stephen was part of a research team commissioned by the then National Assembly for Wales' Independent Remuneration Board to empirically investigate barriers to standing for the Welsh Assembly (now Senedd).

Stephen has also made several media appearances through being invited to contribute towards Public Law debates, including for BBC Politics Wales, LBC News, Sputnik News, BBC Question Time Extra, and BBC Radio Five Live. He also frequently writes for The Conversation on recent UK constitutional developments, with his contributions having an international readership in excess of 400,000- including republications by iNews, Yahoo UK, Delano Luxembourg, and Menafn. He has presented at a variety of conferences on matters of constitutional importance, both within the UK and internationally, including to audiences in China, India, Bahrain, and Ireland. Stephen has also been granted research awards by the Gladstone Library, Society of Legal Scholars, Santander Universities, and the Drapers Company for his research activities in these fields.

Between 2011 and 2018, Stephen was the Legal Research Officer to the Institute for Competition and Procurement Studies (ICPS). He previously supported the work of the 3.7 million Euro Winning in Tendering project, which was aimed at transforming the public tendering experience of Small Indigenous Suppliers (SISs include both SMEs and Third Sector organisations such as Charities) in the INTERREG Ireland/Wales region. In doing so he assisted on the 'Remedies Law' work package through conducting case law statistical analysis, and contributing to the development of new learning resources and teaching materials. Stephen also served as a Public Procurement Law Specialist (in July 2015) to the TESLA (Transnational Ecosystem Laboratory & Actions) project, a 3.8 Million Euro INTERREG IVB North West funded project. The aim of TESLA was to support the growth and development of early stage High Potential Start Up (HPSU) companies in Ireland, Wales, Germany, France, Belgium and the Netherlands through a programme of transnational pilot innovation and business support initiatives. Throughout this period, Stephen was also a member of the Project Management team for the Welsh Government sponsored annual Procurement Week events, and the Welsh National Procurement Awards.

Stephen has led the teaching of both Legal Skills and Mooting Skills at Bangor University for the past ten years. He has a pedagogical interests in matters relating to legal education, particularly in respect of internationalisation; employability; wellbeing and fostering a sense of community; and expectation v reality gaps. Stephen has contributed to the Association of Law Teachers Annual Conference on several occasions; as well as presented at the Professional Legal Education Conference staged by the Centre for Professional Legal Education at Bond University in Queensland, Australia. He frequently contributes to the University's CELT training seminars, and has been invited to contribute to other Universities' teaching and learning workshops. Stephen has also worked as part of a Bangor University wide team exploring interventions for retention and supportive transitioning from Further Education (FE) to Higher Education (HE) learning.

His pedagogical investigations have been published by the Journal of Commonwealth Law and Legal Education; Euroempleo Journal (Cadiz, Spain); and the Law Teacher journal. His research into the 'expectation v reality gap' in respect of mooting was also awarded a Stan Marsh Prize by the Association of Law Teachers at their 52nd Annual Conference (Portsmouth University, 2017). More recently, Stephen's empirical investigations have sought to map the impact of Brexit on Legal Education; as well as the consequences of the COVID-19 pandemic on the teaching of Law in Wales.

In 2022, Stephen was interviewed by the Solicitors Journal regarding making the transition from legal practice to legal academia.

Stephen is also the School’s Mooting Director. He was responsible for the introduction of Bangor Law School’s first internal competitions in 2008-2009, the McLaren Criminal Law Moot and Cwpan Griffiths Welsh Moot. He has since spearheaded the School’s entry into several prestigious national and international competitions, and continues to teach Mooting Skills as part of the Legal Skills and Advanced Mooting modules. Having fostered strong links with Caernarfon’s Criminal Justice Centre; Manchester’s Crown Court; Salford’s Magistrates’ Court and Manchester’s Civil Justice Centre, as well as a host of leading judges, Bangor's Law Department has celebrated much success in mooting. For example, in 2014 Stephen coached Bangor Law School towards success in the Lexis Nexis Welsh National Mooting Competition. Further afield, in 2015, Stephen co-coached, Bangor’s undergraduate team in their entry to the KK Luthra International Criminal Law Moot Competition, which took place in New Delhi, India. In March 2015, Stephen was appointed the Lead Moot Master for the All Wales Lexis Nexis National Moot Court Competition. Since then, Stephen has coached students in their entry to prestigious national competitions including: BPP's Advocate of the Year Competition, the Inns of Court College of Advocacy and Oxford University Press National Moot, and the Blackstone's Criminal Advocacy Mock Trials Competition.

Within the School of History, Law and Social Sciences, Stephen currently serves as:

Across the wider University, Stephen currently has responsiiblities in respect of:

More broadly, outside of the University: